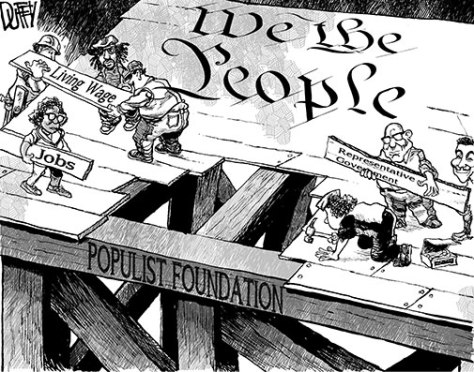 All institutions, being a product of human societies, have a birth, an evolution and a end: unless they reform themselves, they die. This include the nation states, that are passing through a transition from mono-ethnic to pluri-ethnic identities (see the new approach of the CDU in Germany to the concept of motherland, Heimat) and the democratic systems, being them based on Presidential or Parliamentarian institutions, that are passing today through a transition from representative to participatory democracy, still inside a Republican framework. As the transformation of nation states is happening mostly in the two countries that built them, France and Germany, the “reformation of democracy” is happening in the country that contributed to create it millennia ago: Italy (as Greece failed last year in his attempt).

Liberal Western democracies are in crisis since some decades already, because of the economic power dominating the political one, the inefficiency of the public institutions and the distance between establishment politicians and the people. But the recent migrations to Europe from the Mediterranean Sea and the economic crisis caused by the banks and the neoliberalism of the free markets, made it even worst. The Western elites, both in the economic sphere with the financial powers, and in the political one with the ruling powers, are trying to transform in de-facto oligarchies what were developed as democracies in the West. This is what a “post-democracy”, as Crouch defines it, is: elites taking the decisions and co-opting the democratic institutions for their interests. Last time that this happened, almost one century ago, and again with economic crisis and migrations, we went (as Plato foreseen in his system of 5 regimes) from democracy to tyranny, with the catastrophic consequences that we all know. Now we should have learned the lessons, but we don’t know yet what will happen. “We gave you a Republic, if you can keep it” as Benjamin Franklin said.

Many movements in the South of Europe, tried to push their Republics (or Constitutional Monarchies, like in Spain) to go from a representative to a more participatory democracy. All these processes have been defined often as “populism”, while should have been called more “classicism”, as all the new political forces are calling for going back to what were the ancient models of a more direct democracy (actually Renaissance of Arts and Politics in Florence happened because we went back to Classics, and so the same could happen for a Renaissance of Democracy today). The rebirth of democracy must come therefore from the reformation of its institutions, first the Parliament, an institution created in different moments in Europe, from the Senate of the Roman Republic two millennia and half ago to the Magna Charta in England 8 centuries ago, that should pass today from a mere representative to a more participatory one, using new tools like the internet and its e-democracy. But even if the people will try to control and counsel more their representatives, creating in this way a more “participatory democracy”, the oligarchies and elites will obviously not allow it easily.

The case of Italy is emblematic. What have been defined as “populist” forces, the political parties of 5SM and League, that in reality came from modern grassroots movements (based on Meetups or civil society meetings) came to power on the frustration of the people (who are also more informed and knowledgeable than in the last decades). They were able for the first time (differently from Greece, where they failed) to form a government that would have made interventions for the people against the elites, including re-discussing the European institutions that have been imposed on the people from top down. This not in order to destroy the united Europe, but to make it stronger, more felt by the European citizens as something in their hands, and not in the hand of the “Eurocrats” of Bruxelles. But the President of the Italian Republic, made it impossible, at least for now, not accepting the proposition for the Ministry of the Economy, who was on this position. This happened with the excuse of the fear of destroying the Euro, and so put Europe in crisis, with the new populist forces. In reality to ‘constitutionalize’ and ‘parlamentarize’ the so called “populists” would have been a way to moderate them, first of all obliging them to show if they were able to do something good and sustainable, as their campaign promises, or not. But to forbid them from creating a government can make people now even more angry and vote in stronger majority the populist parties next Fall. So, it is like a vicious circle: you try to avoid populism and, in this way, you make is stronger and more extreme. It is the error of the institutions and elites that cannot look outside their circle.

While Italy will go back to elections in Fall, “we’ll see what happens”, as someone on this side of the Atlantic constantly says, clearly showing the current inability of the leaderships in the Western democratic world to impact, or even to predict future trends and events (so differently from the Chinese, and other dictatorships’ visionary policies for the next decades). But one thing is certain, there is no going back: the representative democracy based on what became a corrupted party system in the West, slave of the economic and financial power, is dead. Now we need to create a new form of Res-Publica. And Italy is on the first line for this. But pay attention, as democracy can always degenerate in tyranny. That’s why in America someone in the past said, US is a Republic not a democracy: https://www.youtube.com/watch?v=QKI-PfCeCQ4