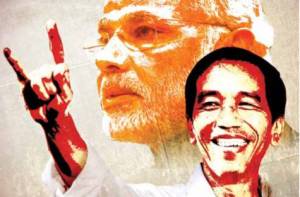 Indonesian and Indian most populated democracies, Russian and Chinese widest autocracies, European and American oldest democracies: is the ‘shadow of the future’ making them more similar in terms of duration of government?

I have been working as researcher at the Carter Center in Atlanta for almost two months now, during my summer program, on issues regarding democracy in Latin America, and in specific about the electoral reforms in 11 Latin American countries. But besides Latin America other continents new experiments with democracy are also worth to be analyzed, in particular in the Asian continent. In Asia there are the two biggest democracies of the world, India and Indonesia, but also two of the three biggest countries of the planet, Russia and China. So it worth to have some periodic reflections on democracy looking not only to the so called “Western” hemisphere but also to the “Eastern” one (even if as I wrote in the page “Geographical and mental maps” all is relative and we should start to call the “emerged land surface” with different words to overcome our ethnocentrism, so let’s call them “American hemisphere” and “Asian hemisphere”).

To briefly analyze some recent news about the two biggest world democracies we have to say first of all that there have been elections recently in both of them. India voted between April and May this year with the largest-ever election (more than 800 million people eligible to vote with a turnout of 2/3). The first party was the Bharatiya Janata Party, the right-wing and Hindu nationalist party, social conservative and economic neoliberal, with Narendra Modi nominated as the new Prime Minister (after ten years of Manmohan Singh with the Indian National Congress, the other traditional big party in India). Indonesia few days ago, the 9th of July, went to vote for its third presidential election since the birth of democracy with the fall of Suharto in 1998. Joko Widodo, the ‘young’ ex-mayor of Jakarta, seems to have won, even if his opponent, the ex-general Prabowo Subianto, declared also victory. If the results will be confirmed in few weeks (the count is long for such a big population living in 17 thousand islands!) the Indonesian Democratic Party, the party of the ex-Indonesian president Megawati Sukarnoputri, will go back to power after ten years of government of the Democratic Party of Indonesia (with Susilo Bambang Yudhoyono). So the democratic need for the turnover will be guaranteed.

But here more than the turnover I want to take a look at the duration of the governments in these two democracies and in general in the democracies around the world. Democratic governments have always had the problem of not enough long  policies, because of short duration of governments, or not enough efficient policies, because of the need of being reelected. But taking these two countries and many others as example it seems that all over the planet big or old democracies and big or old autocracies appear to get closer to each other with respect to the duration of their leaders (and may be not only in that). In fact if in China the president, that is also the secretary of the communist party, last 10 years, in democratic countries like India, Indonesia, but also the US and in many European countries(1), more and more in the last decades the Presidents or Prime Ministers managed to win two or three mandates, lasting also at least a decade (or 8 year in the case of the US). And after that usually there is the alternation of power with the opposite party. This might be a contingency but it could also mean that democracies and autocracies likewise might see the importance of political stability, in particular in the continuous changing world of our globalization era, knowing that to have effective policies with lasting outcomes we need more than just 4 or 5 years. Differently from each other obviously the democracies have after a period the change of the party in power while the autocracies change the person but not the party (like in China) or just shift the leadership between presidency and head of government (like in Russia). But still the similarity in a ‘stability need’ could be a real presence. Obviously in democracies you still have to respond to your constituencies but the people seem to understand this need of longer governments and seem to give a second support and chance to their leaders. The biggest risk for the democracies though, in the case when the governments manage to remain in power around a decade, is if the leaders push for indefinite reelections and so indefinite governments. In this case, in particular if there is not an efficient system of check and balances that guarantee a real democratic competition, the risk is to get closer to autocracies than remain real democracies. This is what seems to happen actually in countries like Venezuela or Nicaragua for example, that created recently the possibility of infinite reelection and don’t have a system that guarantee free and fair elections and an inclusive democratic system.

Let’s see what the future will bring us but for the time being this is the reflection we can do regarding the length of governments around the world. Besides the fact that Asian democracies may be new but appear already quite strong, if we consider that they seems to overcome two of the major risks of other fledgling democracies: sectarianism and totalitarianism. The first is related with the desire of mixing religion and politics, as happened in some of the Arab countries after revolutions. In this sense both India and Indonesia give some example of more maturity: India, even if has the Hindu nationalist party in power now, has no state religion and has in the constitution the division between state and religion. And Indonesia, even if is the biggest Muslim country in the world, never had the idea of Islamic parties in the government, as the constitution guarantee the freedom of religion (with six official faiths) and also the division between state and religion. The second risk, totalitarianism, starts often with the desire to mix the need for strong and stable governments with the craving for despotic or political-military leadership (like the desire of caudillismo in some Latin American countries is showing). And also here India and Indonesia have better scores, even if Indonesia still struggle on this, being Subianto an ex general. But if Jokowi will bring home the victory Indonesia will have given a good record of a quite healthy system, just 15 years since the beginning of his democratization process.

So for now we can say W India and Indonesia. At least their example is giving us hope for the future of democracy in the world. And may be could also help old democracies to renew their identity with new perspectives, in particular on how to deal and manage campaigns, money and media (but we will talk about this in future posts).

(1) Just to cite few examples: Angela Merkel is German chancellor since 2005, Silvio Berlusconi has been Italian Prime Minister since 2001 to 2011 (with an interruption between 2006 and 2008), Jacques Chirac was president of France since 1995 to 2007 and Mitterand since 1981 to 1995, Gonzalez was Spanish Prime Minister between 1982 and 1996 and Jean-Claude Juncker has been the longest-serving head of government of any European Union country, being Prime Minister of Luxembourg since 1995 to 2013.