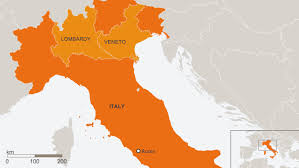 The referendums of Lombardia-Veneto in Italy and moreover Catalonia in Spain (with voices of new referendums in the UK), on the wave of the referendum in Iraqi Kurdistan, show that nation states are in a transition phase in Europe. The nation state, born four hundreds years ago and reinforced through the centuries, traditionally based on a very centralized state and an homogeneous nation, is changing skin, being eroded from above and from below. And the citizens of these nation states, at least in the so called “West” part of the world, seems to want to change their national identity skin, and in the process trying to rewrite the social contract with a new self-determination wave.

The European cases are different obviously from Kurdish one, as in Europe there are democracies, there has been no decolonization or genocide attempt against these minorities and autonomies are already strong, both in federated states like Germany, Austria, Switzerland, or Belgium, but even in non-federations such as Spain, United Kingdom, or Italy (with regional assemblies for special regions) that can be defined as “asymmetric federalism.” But new nationalism, based on ethnicity as in the Catalan case, are on the rise as reaction to globalization, migrations and new identities, and politicians are using that narrative together with populist attitudes to capitalize political power.

But changing borders is not a game and can end up with fatal consequences. The are several separatist movements in Europe and beyond. If all of them seek independence that would create a big mess in world politics in terms of humanitarian consequences and economic costs. An independent Catalonia for example could shake the foundations of the European Union. Should Sicily and Lombardia seek independence after that? If we witness an increasing of ethno-nationalist wave, we will have serious problems in the European integration, even if we will not go back to the Europe of fifteenth century.

The self-determination is the right of the people to determine their own political status without external interference but is becoming more and more a complex and delicate issue. Self-determination is mentioned only two times in the United Nations charter, in the context of developing “friendly relations among states” and “equal rights.” Even if during the 1960s it was interpreted as the right of colonies to become independent, distinct ethnic groups within colonies did not have a right to separate. Since the 1990s—under international law—this right is tangled with human rights and democratic norms. And today it is not free from political manipulation, with interests that go beyond the “autonomization” of nations, ethnic groups or cultures, as we saw with recent referenda.

Many compare the case of Kosovo with Catalonia. Kosovo is the newest European state to have gained independence, but the country did not just decide to secede for no reason. Independence was essential for the survival of its people who were being ethnically cleansed, persecuted, and tortured for decades. Kosovo and Kurdistan are much more comparable cases, even if Kosovo is a sui generis case: the only time when the West initiated a military humanitarian intervention to prevent another Srebrenica. This is not to say that Catalans or Venetians do not deserve more autonomy or even independence in the future. The argument though is that the world is evolving and so is the understanding of self-determination.

Nation states are not eternal. But monoethnic nation states are not the solution. Few countries in the world are ethnically homogenous and will be less and less in the future. Pluralistic nation states, with federations, autonomies, decentralization, and even cities included in the participation to the national “public affairs”, the Res-publica, are more successful, democratic, and stable. Independence and secession should be the extrema ratio for self-determination of the people. The normal process should be the negotiations, the eternal “market of points of view” that would allow to respond to the needs of all parts in a consensual decision making.

Real democracy, substantive, meaningful and liberal democracy means power “from by and to” the people, and so inclusiveness of all parts of society. Level of inclusion, through “autonomization” of regions that feel repressed and people that feel not recognized should be the criteria to measure democracies. This for both authoctonous and new minorities. Immigrants arriving to a new country should be granted if not citizenship at least the status of refugee, and their children given the jus solis principle of citizenship based on birth.

But we need to take care of political strumentalization in the process. Referendum can be a great instrument of democracy (like the ones asking on civil rights) but also a great instrument of manipulation. We have seen them used as power tool in many countries, from Venezuela to Ukraine, from Turkey to Europe today.  Constitutions are still the main social contract that state must abide to. If new sensibilities and social change require to change Constitutions that must be done with negotiations.

The world, and states in particular that don’t represent their diversity, because of their history of conquer, nationalist institutions and politics of repression, from Middle East to Africa to Europe, are in great distress. But we need to take care that this process doesn’t become a tragedy for the people, manipulated by political forces. The real solution is dialogue. Spanish and Catalan representatives, as well as Italians and Venetians or British and Scottish, should negotiate and reach a compromise, probably a federalized state structure, for the satisfactions of all the parts and the continuation of the important European integration that is under stress from above and from below.